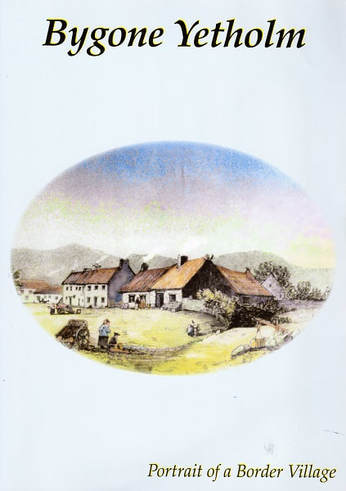 The cover of Bygone Yetholm shows the earliest known image of Kirk Yetholm, c.1830, in the possession of Mr Alistair Brooks, Kelso. The thatched cottage in the centre is the original gypsy palace.

Bygone Yetholm (2006) was a more ambituous publication than Watermills on the Bowmont, with numerous essays on all aspects of village life: the gipsies of Kirk Yetholm, the Wauchope family (the lairds of Town Yetholm), Yetholm's farming economy, Yetholm's churches, schools, commercial life ... and a fascinating selection of personal recollections. Unfortunately, the book is now out-of-print, but can be consulted at our archives.

One of the most important holdings in the society's archives is the original copy the minute book of the Yetholm Parish Militia Club - a self-help organisation, the aim of which was to redeem members who might have the ill-luck to be conscripted into the militia in the late-18th and early 19th centuries. A copy of the chapter in Bygone Yetholm, which deals with this fascinating moment in the life of of the village, can be read HERE.